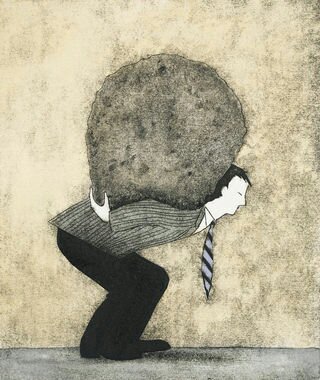 But to the sons of Kohath he gave none, because theirs was the service of the holy things, which they carried on their shoulders.

Now, these may seem like relatively ho-hum verses found in the Bible, but I am learning that there are ZERO ho-hum verses in that Book!

You see, the Ark of the Covenant, which was essentially the very presence of God in the Old Testament, was among some of the holy things the sons of Kohath were instructed to carry on their shoulders.

Now, the Ark weighed somewhere between 300 and 600 pounds, and was traditionally carried by only four men.

So you have a clear idea of how much this weighed,

Think of a casket.

An empty casket weighs around 200 or 300 pounds. Add the weight of a person, and you get a little closer to the weight of the Ark.

Now, a casket is usually carried by 6-8 men.

The weight of the Ark is still heavier than a casket, yet it is carried by HALF the number of men!

That holy thing was HEAVY!!!!

And it was never meant to be carried in any other way, but on the men’s shoulders.

And why were these seemingly insignificant verses included in the Bible anyway???

It was the Kohathites’ sacred duty to carry all of the holy things on their shoulders, and they were the only group that was not given wagons or carts to help them carry them during all their journeys from one land to another.

“Why must they carry those heavy burdens on their shoulders when their cousins had bullock carts? If such thoughts ever came, perhaps they found help in remembering that to them was committed the care of the most precious things, things too precious to be carried in any other way (Num. 3:31).”

I put myself in their position.

Or a SUPER SACRED family business.

I would imagine that, no matter the honor that was theirs for carrying the ALMIGHTY GOD’S most holy things, there were days that the weight of those most precious items became taxing, and maybe even days that it was just

Too much to carry.

What are OUR most holy things?

How do we enter IN to be there, with Him?

Prayer and praise are the first things that come to my mind.

And although, it is such a holy place to be,

A holy Thing to touch,

A sacred and awe-filled privilege…..

It is not always easy for us mere mortals.

The weight we sometimes are called to carry makes it difficult to always get a glimpse of Him.

But when we push past the ache in our shoulders,

The ache in our hearts,

And far “too precious to be carried in any other way.”