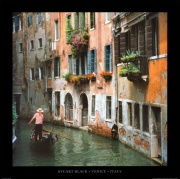 Sometimes I just want to pick up and take off!  To where, you ask?  Well, there are two top places on my list.  The first is somewhere like Washington or Oregon.  I would have a little cottage on the top of a cliff, looking out over the ocean.  And every morning, I would wake to the smell of the little purple flowers dancing, just outside my bedroom window, in the salty ocean breeze.  I’d eat soup every night and write poetry out on my swing I had built at the edge of the cliff. Ahhh.  Who wants to come?

The second choice is Venice, Italy.  I would have this great, cozy apartment overlooking the busy canals.  I can almost smell the oregano and garlic in the air, and can nearly hear the old, Italian couples bickering loudly in a foreign tongue, which when you don’t know what they’re saying, sounds perfectly innocent and kinda adorable!  I would spend my days at the markets, getting supplies to try out all these great recipes from my wonderful neighbors, who are always singing “That’s Amore” and other cool Italian tunes. Anyone joining me?

I think about these places a lot, and imagine my life there pretty frequently.  But it’s WHEN I think about them that I find a little concerning. Now, sometimes it’s just because I’d like a little adventure, and I don’t think there’s too much wrong with that.  But it’s the other times….when I want to run away and  never look back, or when I’m simply not satisfied with my life as it now stands.

Well, the problem with running away, if it’s from SOMETHING, you’d better know now that your problems have implanted in you a GPS tracking device.  This means, no matter where you go, they can and will find you.  Ugggh.  This is really ruining my fantasies.

And the problem of dissatisfaction is that both of these imagined worlds and life stories I just made up are just that. Imagined.  The cottage on the cliff probably has a leaky roof that you will have to fix, just like your one at home. And in Venice, how many times can you hear “That’s Amore” without wanting to punch somebody??  And no matter how exciting the idea of a new environment may sound at first, we are all so easily bored.  And it would take probably just a couple of weeks  to get to that place of discontentment.  (But I’d still like the chance to prove that theory wrong!)

This got me thinking about one of David’s “mighty men”, Shammah.  II Samuel 23 tells us that Shammah stood his ground, in the middle of a field of lentils, battling the Philistine army until they just stopped coming.  Well, fighting an army in a field of peas, just sounds like an awesome time, doesn’t it?  Sometimes, that description best fits my life.  Fighting an army in a field of peas.  We’re always battling something in life, but running away from  it just ensures another battle somewhere else down the road.  Running never rescues us.

And our dissatisfaction, or the “peas”, is a battle all in its own. Both of these things won’t change because you change your location. It’s more about asking God to change YOU.  Ask for more courage to face the battles that just keep on coming.  And ask for peace and contentment in the life He has so graciously given to you, and give Him thanks!

And by all means, if you’re just feeling adventurous, you can steal one of my dreams.  I’ve got more!